Soil sampling has a long and important history of contributing to improved productivity of crop production across the U.S.

As early as the late 1800s, agricultural scientists and farmers began testing for key plant nutrients in soils. By the early 1900s, Land Grant universities were conducting research that undergirds soil sampling and analysis programs in use today. By the 1940s, their research had ushered in an era of scientifically based soil sampling and analysis that gave farmers the tools to supplement fertility based on measuring nutrients available from the soil.

The hand probe challenge – and the Falcon solution 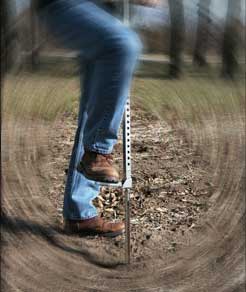 Since the early days of soil sampling, a hand soil probe has been the dominant tool of the trade when it comes to sampling soils. While a hand probe can provide accurate cores and soil samples when used correctly, taking cores at a uniform depth is challenging. Taking enough cores to assure sample accuracy is another huge challenge, given time constraints during the busy transition from harvest to applying fertilizer.

The Falcon solves both of these impediments to soil sample accuracy. Its replaceable stainless steel probe assures uniform soil core depths. And because sampling is automated, large numbers of cores can be taken quickly, to assure repeatable accuracy.

Falcon and the future of high-resolution soil sampling

Rapid adoption of variable-rate fertility programs is increasing the demand for high-resolution soil sampling. As more is learned about the importance of productivity zones within fields – as well as the impact of past fertility and cropping practices – there is an expanding need to accurately and rapidly sample more field areas. The Falcon Automatic Soil Sampling Probe is up to the challenge of providing timely high-resolution, highly accurate soil samples.